Last Saturday, Dec 3rd, I participated at the North Face Endurance Challenge 50km run, held in the Marin Headlands area (near Sausalito). I wanted to do one last race to end this 2016 year on a high note, and this hit the spot. We had gorgeous weather, perfect for running. We ran through mountains with views of Muir Beach, a landscape of trees and forest, and a glimpse of the Golden Gate Bridge. With around 7,000 feet of elevation gain, we ran through challenging and beautiful trails with rocks, roots, and nature’s staircase.  There are parallels I’ve found between running and life: perseverance, learn from mistakes, and never give up.

I remembered a quote from somewhere, but forgot who said it, so I couldn’t properly credit him/her, but it goes: “Perseverance and persistence, despite the obstacles, distinguishes the strong from the weak soul…”  or something like that.   Anyway, my point is that these runs help make me stronger, both physically and mentally.  In this race, there were definitely many obstacles: the tangible ones, which are the rocks, roots and challenging terrain; and the intangibles – thinking about the distance, convincing yourself you are not tired even if you are, and overcoming pain that your body is feeling from all the stress.  There were two points during this race when I felt some low points, earlier in the race (which was weird) around mile 7.  I felt that way because I lagged behind on this climb, after a long downhill chatting and running with my friend, Michael Li.  Then he took off.  I wanted to follow him, but I was not fast enough hiking the uphills.  My lesson learned – practice more uphill hiking and running.  The second time was around this climb where I could see people crawling up like ants on this switchback and thinking that was a long way to go… I got over that quickly, and actually ran through most of the switchbacks.

As we climb through the hills, especially the long ones, I had time to reflect on my past year, just thinking about how I am mastering learning from mistakes and from failures.  (Well, that was after I did a quick check-in on Facebook, climbing up Marincello, the last climb for the race, at mile 26).  I don’t beat myself too much now when I fail in past races or do something wrong which caused my entire race.  Even if those past races didn’t go well, it taught me how to improve and how to do better next time.  For example, at Miwok, which has some of the same trails on this North Face race, I remembered where I have fallen to the ground because of clumsiness and not paying attention.  This time, I just slowed down in those same areas.  I also learned that I need to conserve my energy for the latter part of the race – which I did.  I was also mainly conserving energy for the descent on Pirates Cove.  Well, I thought it was part of this course, by we ended up not running there.  Another mistake from the past is getting my nutrition correct so I don’t lose energy.  With the help of my coach, Liza Rachetto, I honed in on my nutrition and always try to remember it during races.  This race is a good example of good nutrition, making sure I had at least 200kcal every hour.

Never give up.  Even if at Miwok this year, I finished the course 1.5 hours after the finish line cutoff time (thus not an official finish), and at Santa Cruz 70.3 triathlon, I stopped after crashing on the bike, I persevered the rest of the year and continued with training, never giving up and not allowing failures to stop me from racing.  I decided to do this race, first of all because it was part of my friend’s birthday year race celebrations (which she later on had to cancel due to injury, but she volunteered at the race instead).  Secondly, I wanted one last good race to participate before the end of the year.  I also then found out I knew a couple more people doing it, one is Susan Tahir, who did this as her first 50k (more power to her for selecting a difficult one as her first, and she did well, too).  I never give up on activities, but at the same time, I recognize when it’s time to get some help.  Well, maybe for some people, by doing this distance and type of running, I may need some help… Kidding.  In reality there are so many other ultra-runners who do far more miles and go faster and farther than me.  I am just on the lower end like a casual ultra-runner on the ultra-running scale.  But we all never give up, and never stop.

Towards the end of this race, the North Face course led us through some flat trails for the last mile or two, which was a refreshing feeling to attempt to sprint to the finish.  I gave it all that last couple of miles.  I finished the race in a decent 7 hours 24 minutes. It’s not the fastest time, but I finished strong and with a big smile.  My original plan for this race was as follows:  feeling super strong and hopeful – finish under 7 hours; feeling good and right on pace – finish 7:30; feeling awful and having a bad day – finish 8 hours, or just finish.  I am just happy to finish the year on a good note and on a run that is my favorite distance (50k) and a course that I love running.  Next stop… 100 miles???  (I keep mentioning this but let’s see if I will follow-through). 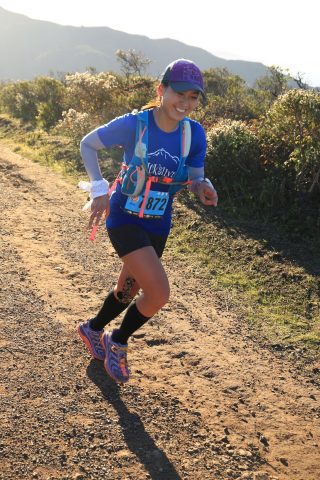 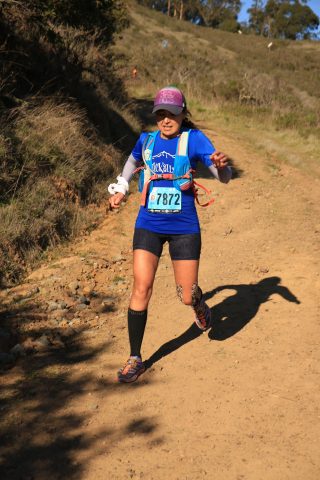