I got a buckle! I finished my first 100-mile race at Jackpot Ultrarunning Festival. I registered for the 48-hour race with a goal of finishing 100 miles since I did not finish Javelina back in October.  This is a flat 2.5 mile course in a park in Henderson, NV (near Las Vegas), on part paved, part trail course.  I thought, “oh this will be an easy race;” there’s no such thing as an easy 100-miler. This terrain is unforgiving to my feet, no variation in elevation, hard cement concrete, and the only trail part is also hard packed dirt with some rocks. I had blisters galore. I stopped at some of the park benches to take my shoes off and put my feet up. The pounding is harsh.

I completed 100 miles, which was 40 laps done in 38 hours including a 6 hour break and sleep, plus multiple stops at our tent throughout the 2 days.  When I woke up the next morning, the time was still running and I had 1 hour before cutoff, so I decided to get up, quickly put on run something, then went back out on the course to do another 3.5 miles.  So technically I completed 103.5 miles.

Before starting this race, my friend, Yvette, said we can do more than 100, maybe 120 miles. That goal went out the door when my feet started hurting after 55 miles.  I didn’t like the concrete much. However, to be a versatile runner, I want to get used to different surfaces, and not complain as I can’t always spoil myself with the beautiful trails and mountains in Northern CA (well, there’s nothing wrong with that either).

I met and got to know a few people while running loops at this course, both fast and slow runners. We cheered and waved as we saw each other on the course. As an introvert, another goal at this race was to practice starting up conversations and talking to people. I had no pacers at all even through the night, except for the last mile when my ‘entourage’ joined me to the finish – so I had to keep myself entertained. So the people I met are as follows.  There was Louise from Chicago, who is in her 60s, had finished Javelina 3x, so we shared some stories. Jennifer, who’s friend passed away last December, and always wanted to do a 100 miler; she had some of her friend’s ashes in a necklace pendant, and she wore it during the race with a goal of finishing 100 miles, so she can bring her friend to this experience. Then there was an interesting senior gentleman, who the RD called fast Eddy.  He is 80 years old and competed in the 100-mile USATF, so he did it in 30 hours (better than me)! He said a lot of his friends have passed away, so between wreck or rust, he chooses to wreck his body before rusting out. Jess, who I thought was a lot younger than me, but I checked, she’s my same age. She won 2nd place female in 48 hours with 165 miles. I noticed her throughout the race, she always smiled and waved, so when I saw her at her last loop (when I got back up to do a recovery lap), she was fast-walking.  I joined her and we chatted a short time. There were more people and stories I heard this weekend, all were very inspiring! There was probably only one time at my low point, where I didn’t want to speak, and this younger guy who was being nice, tried to start a conversation. I was on a one-word response.  I noticed at earlier laps he is a fast runner so was probably at his walk breaks. Poor guy just ended up playing his music and fast-walked away from me.

I enjoyed the party at this race on Friday and Saturday night (while I was running and everyone else partying), and that kept me going till 1-ish am on Saturday.  I took a 6 hour break of which I slept 3 hours. I felt like having fresh legs again after the long nap.  The next day, Saturday, I finished at 9-ish pm with a posse of runners, some still racing, others crewing for many Vegas runners, taking me to the finish.

I’m actually feeling fine today, just blisters and bottom of my feet are sore/hurting. Resting while racing helped to recuperate. I’m not as sore as after doing 95 miles at Javelina.  I’m happy with this first 100-miler. I wanted Javelina to be my one-and-done 100, I guess I have do another one to finish up Javelina in 2020.  I have a different perspective now with 100 milers, maybe one day I’ll play with the big kids at other types of race courses. I guess I’m not one and done 100 miler now.

Thanks to the RD for making the race fun (because a 2.5 mile loop can be mentally challenging) and to all my sis’ Vegas friends for crewing, and all the volunteers for making this race happen! #jackpotultrarunningfestival #100miler 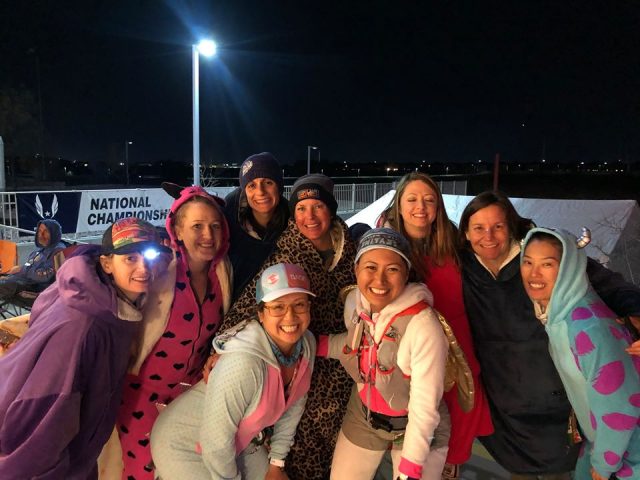 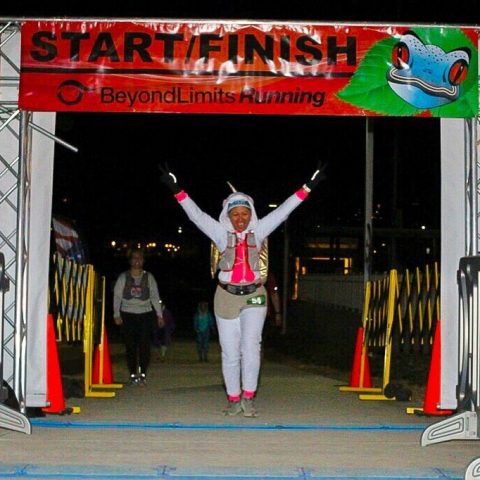