If at first you don’t succeed, try, try, try again.  That proverb was popularized by W.E. Hickson, an 18th century British writer.  He probably knew that the feeling of success was worth repeated failure.  Many successful people have failed.  They failed many times before getting it right.  Despite the bad things that failure may bring, failure is good.  Yes, failure can wipe you out, kill your spirit, and make you go crazy.  But failure keeps you moving.  Failure is a success if we learn from it.  I have had my own share of failures, and in most cases, I learn from it and try to do better the second (or third) time around.  Here are some examples from my running experiences.

I have always completed any running race that I participated in.  I was successful.  I kept increasing the challenge of running by doubling up the last distance I did.  From a 5k, I moved to a 10k, then a half marathon, then a marathon.  A marathon distance is 26.2 miles.  After running marathons for several years, I decided to run a 50 mile trail race.  I figured that after running for almost 10 years, I am an experienced runner.  In 2012, I attempted to run the American River 50 mile endurance race.  It is located along the trails and mountains in Auburn, CA (which is about 25 miles north of Sacramento).  I put together my training plan.  I scheduled long runs with many friends, who ran portions of my long runs with me.  I ate anything and everything during my training, as I got hungry all the time.  Training consisted of strength training, running, and more running, for about 12 to 15 hours a week.

Race day couldn’t come soon enough.  I arrived at the start line on that cold April race morning, feeling intimidated by the experienced runners around me.  The start of this race was low-key.  There were probably less than 900 runners in total.  Compared to the large marathons that I have ran in the past, this was a small race.  When the gun went off to signal the start, everyone slowly started their stride… but I suddenly dashed off in excitement!

As I passed one tall tree after another, shrub after shrub, following the American River Parkway, I enjoyed the beautiful scenery and simply being outside in the woods and parks.  The first half of this race was mostly along short rolling hills (or “bumps”) and flat terrain.  It was very laid back.  I was running but also focusing on the experience, and thinking, “Wow, I am really running 50 miles today.”   It is difficult to describe the feeling of euphoria during trail running; but the best way to experience it is for you to sign up for a trail race!

As I reached mile 26, I was more than half-way through the race.  My family and friends were at the half-way point and met me there.  I stopped for a while at the aid station to freshen up, changed my shirt, and my socks.  From this point onwards, we were allowed to have a “pacer,” someone who can run with us and lead us through the race.  My pacer and I continued running through the trails, but at this point the terrain changed.  It was not like the groomed trails earlier in the race.  We ran through the woods, navigating through rocks, roots, and low-hanging tree branches.  We ran through single track trails, climbing up nature’s stairway, and descending down rocky terrain.  Shortly after this dangerous navigation through the trails, my energy took a drastic turn. The treacherous trails and hills started looking like eternal damnation.  I was simply thinking, put one foot in front of the other… until I was not thinking anymore.  According to my pacer, I was mumbling some words that did not make sense.  My pacer tried really hard to keep me moving, but I was slowing down.  We reached the aid station at mile 41, and then I was stopped by the volunteers.  I was not allowed to continue the race.  I missed the cutoff time at this aid station… by 3 minutes.  I was devastated.  In all my years of running, I failed to complete a race — my first 50 mile race.  The hills won over me.

A few days later I did a postmortem of my race and performance.  I wrote down things that I can improve upon the next time.  I am not a failure.  I decided I will do the race again the following year and finish what I have started.

I came back the next year, feeling more energized and ready.  In preparing for it this time, I trained on similar trails and terrain. I found the highest and hardest mountains, the most treacherous trails and forests, and ran through it.  I researched nutrition during endurance events, and worked on it during my training.  I bought better trail running shoes.  At the 2013 race, I thought I’m getting this monkey off my back.

On race day, it was just as I remembered it the year before.  We started at 6 AM, before sunrise.  It was a cold but nice morning.  I had a strategy this time.  I would run 5 minutes, then walk 1 minute.  I had a “pace chart” so I know what running pace I need to maintain at each mile, conserving energy in the beginning.  A 50-mile run is no walk in the park.  It is a journey.  At some of the aid stations, which were about 5 to 9 miles apart, I saw my family and some friends, who came out again to cheer me on.  It was very refreshing to see them.  After passing the half-way point, I am again running with a pacer, who was also determined to get me through all the cut-off points throughout the race.  This year, I reached mile 41… forty-five minutes before the cut-off time.  But the journey was not over yet at that point.  I had 9 more miles to go, and have not seen that part of the trails before.  The hardest part of the race was the last 9 miles, with over 2,000 feet of vertical climbing in the last 5 miles.  That is like climbing a ladder.  Nonetheless…. I made it! I finished the 50 mile trail race in 12 hours.

Learning from my experience in the past race, helped me work harder and make corrections to my strategy and training.  Despite what society says or implies about failure, it is okay to fail sometimes.  In my running stories, I was not afraid to go back and try again.  I even went back last year in 2014, and did a lot better than in 2013, finishing 30 minutes faster than my previous time.  Failure gives you feedback.  Failure helps you learn from it.  Grow from it.  Just like me, you can fail, then succeed, too.  As the proverb goes, “here’s a lesson you should heed, try, try, try again.  If at first you don’t succeed, try, try, try again.” 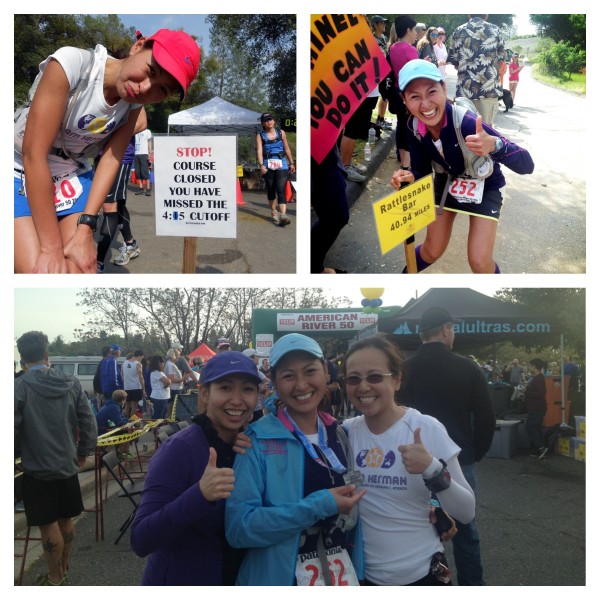