Last year, I attempted to race and finish the Miwok trail race, but failed to continue when I missed the cutoff time at Bolinas Ridge Aid Station, which was at mile 56 of this 62-mile foot race. Since that cutoff time was announced only two weeks prior to race day, all of us who missed the cutoff at that point were allowed an entry (but we need to pay for it) for the race in 2016. Which brings me to this year’s race.

Miwok 100k is a 62.+ mile footrace that starts and ends at Stinson Beach, goes through the Marin Headlands, Mt. Tamalpais, Muir Beach, and the Bolinas Ridge area. It has a total elevation gain of approximately 11,800 feet, and the highest point is at 1,800 feet above sea level.

I joined Quicksilver Running Club, so that I can train with people and feel like I am part of a team. Plus, it will help the club if I finish the race (they need female finishers). Training for this race took months of running, and adding some cycling, swimming and strength/core training for variety. I focused more on quality run, even if not too long. I did a couple of 50k races, as practice and training, fine-tuning my nutrition and race tactics for what could possibly go wrong – stomach issues with food and liquid nutrition, weather issues, the monthly woman thing – just being prepared. I also trained on the same terrain and same course. When race day came, I was kind of nervous, because my pace was just right to meet all cutoff times on the course, but usually I would rather have some “time cushion” for whatever unexpected that could possibly happen. But on race morning, I remained positive as what all my friends said. It helped me a lot, as I was always ahead of my early predicted cutoff time, for the first half of the race.

Yesterday, race day, was a super long day and the longest I’ve ever done an activity continuously, for 16 ½ hours. I was feeling good in the first half of the race, maybe even till mile 40. I made it through all the aid station cutoff times, with only 2 minutes to spare at the last aid station at Bolinas Ridge (where I missed it last year by 20 min). Unfortunately, I didn’t make it to the finish line by the cutoff time of 15 hours. I finished the 62-mile course in ~16.5 hrs. At least they still gave me some race swag in the end. I had a couple of low points during the race, by Coastal trail on the ridge because it was super cold and foggy and I didn’t have my shell jacket, so I was freezing; on Bolinas ridge trail because it was the muddiest trail ever, with mud puddles as deep as the top of your shoe if you run through, and at that point I was ready to throw in the towel. But I kept going. The weather was overcast (and actually raining at times) so I didn’t think of taking salt caps sooner, I probably only took 3 total throughout the race. I still completed the entire 62-mile course. Just not within the time limit. I don’t think my body can handle anything over 15 hours of strenuous activity, so I will have to re-think that goal of running 100-milers, or doing a full Ironman distance triathlon. I am grateful for my running friends, who supported me during training, virtually during the race, and who were at the race, especially my pacer, Guy Herr, and his wife, Maria. Guy pushed me to my limits, first to make sure I make it to Bolinas by the cutoff, then to the finish. I am also thankful most especially to my coach, Liza, she really helped transform me into a better stronger runner. It is up to me, to take that to the next level, working on the mental part next time. 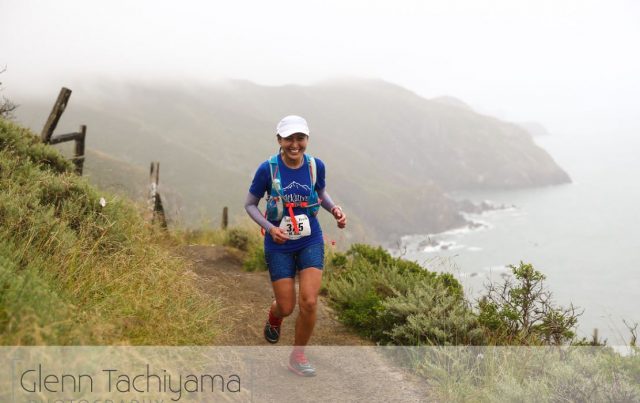