First Multi-Sport since the Pandemic started

I did an Aquathlon!  It’s too early to start riding, so I opted for the swim-run division at Cal Tri Austin, held last April 25th.  The race was at Pflugerville Lake, about 30 minute drive from my house.  It was a small race.  The day was perfect – nice calm waters, spaced-out transition area, and a flat run course.  I had a decent swim, although it was hard to sight at the turn around, and swimming back to shore with the sun to my face.  I did a record time getting out of my wetsuit, probably only a 3 minute transition time in total.  However, since I was the first one in my swim-run division, I didn’t know where the run portion starts — and neither did the volunteers.  After walking around near the transition area, being bounced around from one volunteer to another to figure out the start, I finally found the run-start (probably took at least 5 minutes of walking around).  I pushed hard on the run, since it was flat and on this crushed stones pathway, it felt good and easy.  The finish was uneventful, no one near the finish arc yet, and I was probably one of the first few to cross the finish line.

After the race I celebrated with my new team, RadioActive or also known as TexasActive.  While hanging out in our tent, the RD started calling out the winners of each division, to which I found out I won First Place Female in the Swim-Run Sprint division.  It is a good start to my multi-sport season! 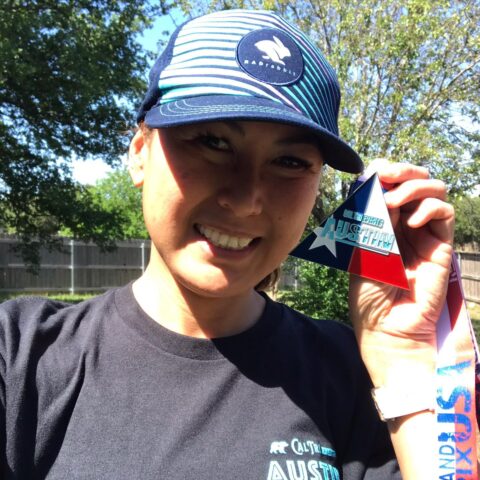